10% PERMANENT DISCOUNT
LOWEST PRICE GUARANTEE
FREE SHIPPING ABOVE $150
Get 20% OFF, Use Coupon: "4thofjuly20"

Some time ago I was interested in modern sighting devices, specifically – prismatic sights. So, what is a prismatic sight, and what is it for?
In its essence, this sight is a closed type collimator with a wide field of view and a bright, contrasting image; however, unlike a conventional collimating sight, it usually has a fixed magnification (usually 2.5x or 3x), which provides accurate guidance to distant targets. Such a sight does not need constant use of batteries for illumination and aim mark projection, as well as the use of additional magnifying attachments (magnifiers). This sight has all the advantages of a collimator, such as lack of parallax, fast search, acquiring and tracking of the target. The disadvantages of this type of sight, in contrast to the collimators – a fixed distance between the shooter’s eye and the eyepiece of the sight, comfortable for the shooter (usually it is from 7 to 10 cm), the so-called Eye relief.

Unfortunately, prismatic sights are not so popular as the same holographic and collimator sights like Eotech, Aimpoint – used by both special forces and practice shooters around the World. As well in the Internet there is very little reliable information about prismatic sights, not to mention full-fledged reviews. However, progress does not stand still, and such optical devices begin to appear on the market. The flagship of the industry is certainly a military one – the Elcan SpecterDR 4x / 1x, but it has an absolutely inhuman price around $ 2300. And the most budgetary version of this kind of sights is Prismatic Reflex 2.5 × 32 BE54025, from Bering optics, for about $ 200. However, I preferred to choose the golden mean – the products of a well-established company from the USA – Vortex optics. Vortex optics has been manufacturing optics since 1986. This is one of the few American “family” companies in this business. The company’s staff consists of dedicated professionals who do their best to make it a pleasure for dealers and consumers to deal with them. All products are produced on their own designs and are thoroughly tested and serviced in a workshop with the modern equipment. This shop and the office of this company are located in central Wisconsin.

This company has a wide network of dealers, which covers the USA, Canada, Great Britain, Europe, Australia and other countries around the World. The company participates in all major exhibitions devoted to hunting, bird watching, archery and tactical weapons. Official site – http://www.vortexoptics.com/.

Now, lets talk about the sight: my choice fell on the prismatic sight of SPITFIRE ™ 3X PRISM SCOPE, and below I will talk about it.

Let’s start perhaps with the goals and tasks facing this optical device in the modern gun sight system. We need a relatively inexpensive and reliable sight for the Kalashnikov assault rifle (AKM, as well as its analogues like self-loading hunting carbines like Vepr-Vpo-133/136), shooting range from 30 to 300 meters, inclusive. The ability to quickly acquire and track all type of targets, including moving. The ability to use weapons at dusk and at night. Small size and weight. Mounting on the universal Picatinni rail.

Price:
this sight cost me around $ 390 – quite reasonable in my opinion price (roughly in the middle between Chinese Bering optics and top brands like Aimpoint or EOTech).

Grid: the sight has a complete lack of parallax and a unique grid EBR-556B from the Vortex. This grid is marked in the Minutes of angle (MOA), below I will give the grid data, from the instructions to this sight (they can also be found on the manufacturer’s website).

The grid is designed for standard NATO ammunition – .223 (5.56×45), and also allows using it as a range finder. It looks something like this:

That is, the principle: like in other military sights – we point to the silhouette of a person or to an object whose dimensions are known to us in advance, and by combining it with the crosshair of the sight (depending on which grid line overrides it), we have an approximate distance to the target. A very convenient option if you do not have a range finder. And as practice showed – the accuracy of measurements on the grid was + – 30 meters, and this is at a distance of 200m! Along with this, the ballistic grid quite normally coincided with the shoulders of the silhouette from 100 to 500 m. The shoulders of which were approximately 60 cm, slightly larger than in the instruction. Despite the fact that the grid is designed for .223 cartridge, it works fine with the Russian 7.62×39 (with minor correctives, which you quickly get used to), as for 5.45×39 – almost completely coincides with the ballistics of the NATO cartridge. Here is the ballistic table of this grid on AKM, for different cartridges 7.62×39:

It also makes sense to experiment with heavier bullets and zeroing at 200 m. The lack of parallax allows you to shoot intuitively, without wasting precious time on combining the target with the aiming grid.

Rare for inexpensive sights is the combination of a large exit pupil, the thickness of the grid and a clear light contrast glass. Grid Lines – Slim but at the same time clearly visible at all distances the grid on a black silhouette background even without using backlight. When used, there was a feeling that the glass is not inferior to the VIPER® PST ™ 1-4X24 optical sight, although it is from a higher line, with a different lens processing technology. If we talk about comparison, then that glass can be compared with the usual Nikons (not the Monarch), what is Great in itself. When used in the twilight and the moonlit night, there were no problems, the backlight levels at the minimum brightness were matched very well. As the paddock also works well – from 30 meters, with the backlight turned on you get a good speed of target acquisition on any background.

A sight to be, in a beautiful cardboard box with rather decent complete set. In addition to the actual sight, there is: – battery – Picatinny rail mount – spacer for a lower landing of the gun sight – hex wrench – napkin for cleaning optics – polymer protective covers for the lens and an eyepiece, mounted on the sight – 2 side rails mounted on the sight that can be used for installation of additional equipment – a collimator sight or laser target designator – Instruction.

The sight comes in a beautiful package.

The backside of the box, with the Vortex optics logo

And the contents of the box …

Actually – the sight itself …

The vertical adjustment and the backlight control turrets.

The horizontal adjustment and the backlight control turrets

Controls of the sight are located on the top and on the right side and have the form of turrets, standard for the optical sights. Backlight shutting down, increase and decrease the brightness and adjust the grid vertically and horizontally. Such controls are very convenient – when switching modes with the help of a mechanical turret, you can immediately see whether the grid illumination is switched on or not, which brightness and backlight color are set. With the help of the rotation of the turret adjusting the brightness of the aiming grid, you can change the color of the backlight from the red …

The lifetime of the grid illumination is from 250 hours at maximum brightness to 3000 hours at the minimum from one battery. If necessary, you can not turn on the backlight. without backlight:

A few days after the installation of the sight, AKM was fired at 100, 200, 300 meters with an FMJ bullet for accuracy testing. The shooting was done from sitting position with the use of bipods. The results are amazing – the photo below: 100 m. 1,2,3 – adjustment, 4,5,6 – the best group! (For AKM- and Barnaul cartridges – very good)

A LITTLE ABOUT THE RECOIL:

The mount and the sight easily hold the recoil of the 7.62×39 cartridge, and I think the same result will be with the .308 caliber! (Should try it on my Orsis SE). Separately, I note that the AKM and its modifications do not have a regular place for the sights installation, in my case, the rail was used above the receiver is B-13 “Classic”, from Zenit, installed on the sidebar known as “Swallowtail” from the ECT company. Currently, for the modernization of the AK there are quite a few good solutions for such an installation, for example, from the FAB defense, CAA and others companies. Some reviews of such products will be published later.

The Vortex Spitfire 3x prismatic sight, as already mentioned above, perfectly holds the caliber of 7.62×39 and can be used on a variety of weapons, both rifles and shotguns.

CAA Upcoming Products: Micro Roni: CAA will release some very interesting products this year including the awaited Micro Roni and its... read more 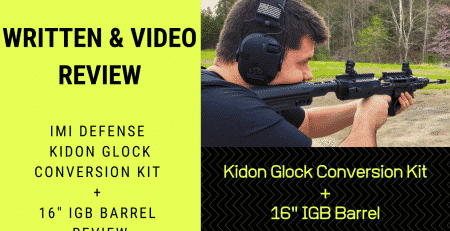 Micro Roni for Glock Review by an Israeli Police Detective

Micro Roni for Glock Review from an Israeli Police Detective. My name is Guy Samila, I am 35 years old,... read more

Press Release – IGB Barrels from Austria to the USA

Press release - IGB Barrels From Austria to the United States. We are proud to announce that we are now... read more 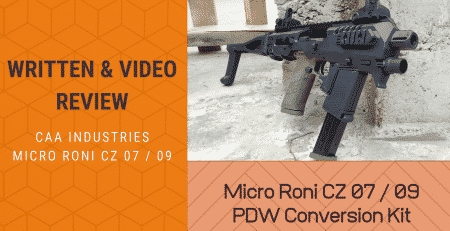 Micro RONI for CZ P-07/P-09 review micro roni czThere is a ton of conversion kits for Glock pistols on the... read more 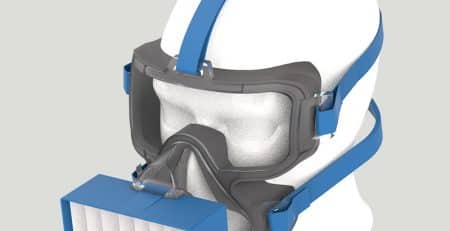